Village Wooing & How He Lied To Her Husband

Village Wooing (1933): Village Wooing, “A comediettina for two voices” in three “conversations,” lasts less than an hour, has two characters: A and Z. A is a misanthropic author who meets Z, a country telephone operator and general store salesgirl, on a world cruise. Against his will, by reason of her common sense and persistence, she marries him when they are later thrown together in her village store.

How He Lied To Her Husband (1904): Shaw sends up his own Candida in high comedic style. In the manner of a Lonsdale drawing-room comedy, we meet the glamorous wife who has determinately allowed a beautiful young man to fall in love with her. Romantic letters complete with very specific poetry has been written by the young man, given to the wife, and misplaced. Her husband is now believed to be in possession of the letters…but her husband seems to have a profoundly potent trick up his sleeve.

Evening hosted by Mr. Michael Feingold of the VILLAGE VOICE 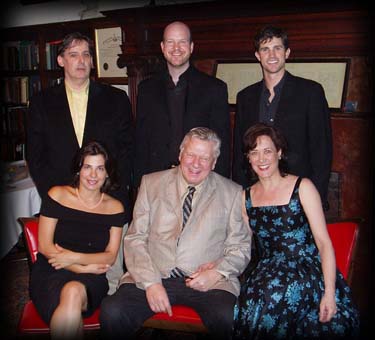 The cast for the evening