This play is, in fact, based upon Shaw’s own highly successful novel, Cashel Byron’s Profession. The novel follows Cashel Byron, a world champion prizefighter, as he tries to woo wealthy aristocrat Lydia Carew without revealing his illegal profession. Meanwhile, she also has a secret admirer in her formidable footman, Bashville. Brains vs brawn. The play follows much the same path. The novelty of this particular play is that Shaw wrote it as a parody of Shakespeare. The entire play is, in fact, written in blank verse. As the characters are all ‘contemporary’ this makes for a unique comic lunacy in Shaw’s canon. As Admirable Bashville is a very short play, the evening also included readings from some of Shaw’s letter and excerpts from prefaces.

Written by George Bernard Shaw in 1901. 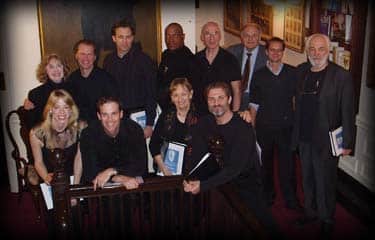 The Cast of The Admirable Bashville