A Man’s World (by Rachel Crothers) 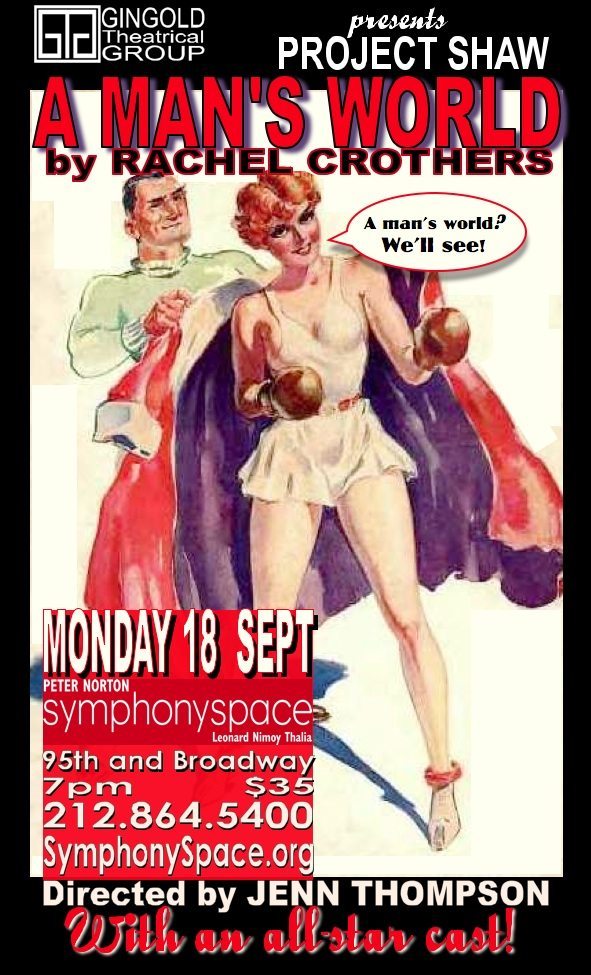 A Man’s World. Or is it? Rachel Crothers wrote this wonderfully provocative and entertaining play about aspiring Greenwich Village artists in 1910. Frank, our leading lady, is emerging as a novelist of renown while raising a small son on her own. She’s determined to live life on her own terms, refusing to allow men to impose societal expectations on her personal choices. But what is the price she must pay for her independence? It may be ‘a man’s world,’ but not for long!

We hope we’ll see you at our PROJECT SHAW on Monday, September 18th with a play written not by Shaw, but by Rachel Crothers! A MAN’S WORLD is the logical next step in our theme for the year, ‘Women Take the Stage.’ This charming and powerfully entertaining play from 1910 dives into the inequalities we all face and the double standards in judging male/female behavior that seem never to go away. Award-winning Jenn Thompson will direct the evening!

The 2017 Project Shaw Season WOMEN TAKE THE STAGE: Celebrating 100 years of Women’s Rights in NY continues with Rachel Crother’s A Man’s World (September 18), Captain Brassbound’s Conversion (October 23), Elizabeth Robins’s Votes for Women (November 20), and Oscar Wilde’s A Woman of No Importance (December 18).  As we continue to explore the work of playwrights sharing the vital humanitarian precepts so championed by Shaw, we’re thrilled to be presenting work by Rachel Crothers, a pioneer writer in the world of exploring women’s rights on the stage.

RACHEL CROTHERS (December 12, 1878 – July 5, 1958) was an American playwright and theater director known for her well-crafted plays that often dealt with feminist themes. Among theater historians, she is generally recognized as “the most successful and prolific woman dramatist writing in the first part of the twentieth century.” One of her most famous plays was Susan and God (1937), which was made into a film by MGM in 1940 starring Joan Crawford and Fredric March.  Read More About Rachel Crothers